Back to: Tony's Trips Homepage

Lauderdale to Hobart by Tony Watton 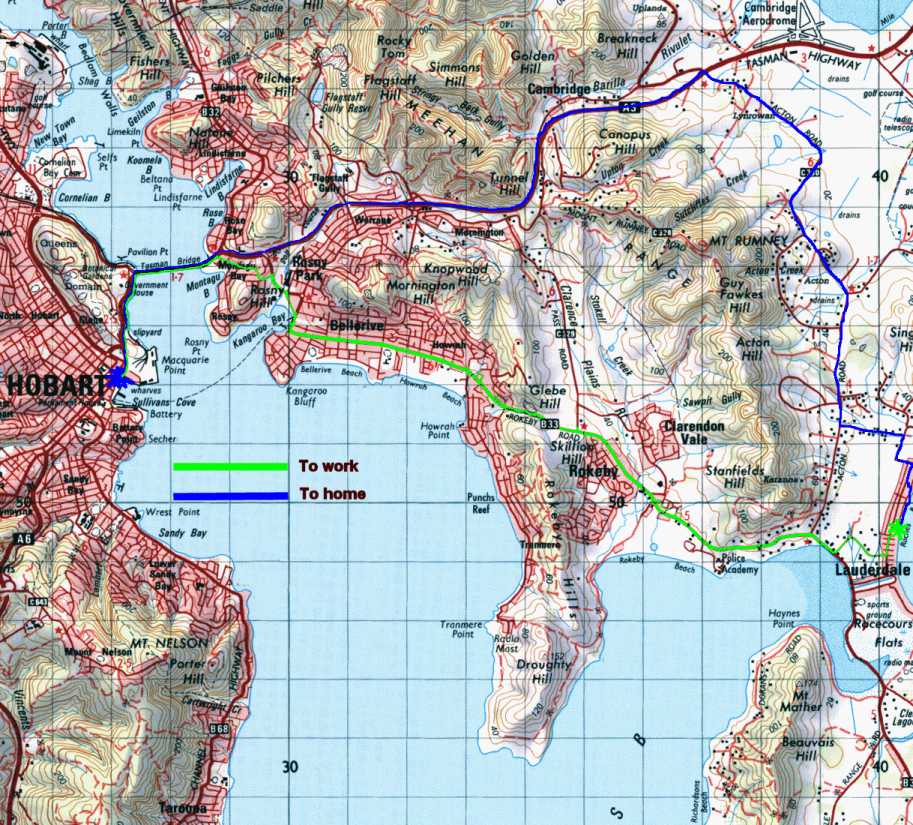 It’s 8.00pm on Commute Day minus 1. Make sure the chain is oiled, BLT lead-acid battery is fully charged, rear panniers on the bike and gear organised for the next day. I know that if I don’t prepare for it the previous evening then the ride to work just won’t happen.

The alarm jerks me out of my sleep at 5.00am. Straight out of bed, drink a large glass of water and then into bike riding gear. (My reasoning for the early start is that there is only one male shower for 10 floors of office workers and I don’t want to be the one who is standing around waiting for another person to have a shower first. So far my system has worked for me.)

Kiss goodbye to my still sleeping wife, some leg stretches and I’m on the road by 5.45am from my home in the township of Lauderdale, 20km east-south-east of Hobart.

The first part of the ride takes me along the South Arm Road to Rokeby. This is not a particularly pleasant section as the road is narrow, unlit, hilly and winding. Just as well I travel lit up like a Christmas tree, with three Cateye flashing red lights, large reflectors on the panniers, reflective safety “vest” and canary yellow (or Aussie gold!!) Netti waterproof jacket with reflective strips. Fortunately, the traffic is very light and most drivers are considerate enough to move over as they pass me at 80kms/hr.

Rokeby Hill slows me down to the granny gear (1 of 21) but by this time I’m on a side road parallel to the main road until I reach a good, but short, bike track at the top of Rokeby Hill. The next 6kms takes me at a comfortable pace through Howrah and Bellerive, then around Kangaroo Bay, past Rosny College and through Montagu Bay to the Tasman Bridge footpath.

This is where the fun really begins! Although the climb to the top is always slow (8 – 9kms/hr), there are frequently gale-force cross-winds to contend with. The path is only about 1.5m wide and there is a head-high rail on the outside and a handlebar-high rail on the road side. Add to that the lamp posts and traffic light poles that protrude into the path, emergency phone box covers, maintenance gantries at head height and fire hydrants set into the track. This is definitely an obstacle course. On a good day a speed of 50kms/hr is possible on the down leg – a mighty adrenalin rush. Special care is needed at the western end of the bridge as the next trap to be negotiated is a set of 25 down steps. Riders have been known to career over them, not realising the steps are there. Fortunately, warnings are now painted on the path. [The steps have since been replaced by a ramp - much safer and not before time.]

After the bridge I pick up the bike track between Glenorchy and Hobart and enjoy a good, fast run into Hobart over the last 2 or 3kms.

The ride takes me about 1 hour. On getting to work I take my bike up to the office, where it rests all day, then I get a shower, have some breakfast (Weetbix, banana and a cup of tea), read the local paper and am ready for work by about 8.00am.

The ride home is either an exact return replica or, alternatively, an easier, but longer, ride (25kms) along the Tasman Highway after the Tasman Bridge, almost to the Hobart Airport then along Acton Road back to Lauderdale.

However, this route has its own challenges because, at the eastern end of the Tasman Bridge I have to cross two peak-hour lanes of 70km/hr traffic heading to Lindisfarne, then cross two more lanes of traffic heading to Bellerive as I take the Airport route. Further along the Tasman Highway I cross two 110km/hr slip roads that lead eventually to Mornington and Howrah.

The highway has a hard shoulder of about 2m that makes this a relatively safe “pit lane” once the slip roads have been passed.

On Acton Road I am again on an unlit, narrow and winding road. At this time of day (around 6.30pm) many car-commuters are returning home so the traffic is generally heavy. I find that people are usually very considerate, giving me plenty of room or holding back momentarily for on-coming vehicles. I try to keep fairly close to the left edge of the road, not wanting to antagonise motorists by riding in the centre of the lane. I know there are different views on this practice but, then, I am also a car driver when not riding my bike.

I aim to do this ‘commute’ twice a week year-round (Monday and Friday), combining it with a 3kms early morning jog on Wednesday and two resistance gym sessions after work on Tuesday and Thursday. Needless to say, sometimes theory and practice do not coincide. But I reckon it’s better to have a plan and mostly stick to it than not to have a plan at all and always stick to it.

Back to: Tony's Trips Homepage