This walk was organised to follow our visit to Agfest at Quercus Park, Carrick on Friday 3/5/13, when we would be in the general area of Northern Tasmania and the weather was supposed to be quite fine for Saturday, at least. However, on Friday it was very windy, overcast with some rain late in the day. It certainly did not look promising for our walking day.

We left Agfest at about 4pm on Friday 3/5/13 and drove north through Devonport, arriving at the Gowrie Park Wilderness Village at about 5.30pm. Matthew had previously stayed in one of the bunk rooms and had found it to be austere but comfortable for one night's stay and, at $20 per person, good value. It included the use of a well-equipped kitchen and beautifully clean shower rooms and toilets. Also included, at no extra charge, were multitudes of pademelons that grazed on the lush grass surrounding the buildings. There was also a lounge room with a large open fire, albeit a smokey one as we soon discovered.

I had climbed Mt Roland about 10 years before, from the Gowrie Park (southern) end and had found a gradual but rather long walk with no particularly difficult sections that had caused me any concern. As I was by myself at that time on the way back down I started but did not complete the climb of Mt Van Dyke as the wet, large rounded boulders near the summit dissuaded me from taking any unnecessary risks. So, neither Matthew nor I had previously used the Face Track, from Kings Road, and we were keen to tackle what seemed to be a very imposing range with steep approaches. We had with us some track notes from "100 Walks in Tasmania" by Tyrone Thomas and I had checked out the Bushwalk Australia forum for any relevant comments about this walk. Matthew had with him his phone with map software and GPS. I took the GPS-enabled personal locator beacon - as I did on all our adventures and a few other essential items, including Gatorade drinks. 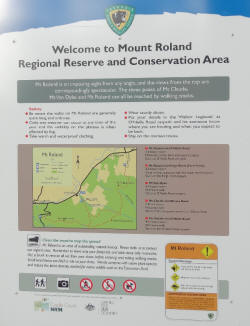 We had light day packs with us as we started the walk from the Kings Road car park. The weather was fine and clear but very cold and we were keen to get moving and warm ourselves up with some serious exertion. The walk was initially on a wide track sloping moderately up through open forest but the track soon narrowed considerably and steepened remarkably as we encountered more rocky ground. We passed beneath huge walls of rock and eventually we began the steep ascent up the rocky gully that would lead to the plateau, another 600m above us. As we ascended the gully, Matthew was observant enough to realise that we were actually in the gully but I was still expecting to reach an open area of loose rock that would conform with my expectations of what the gully would actually look like. 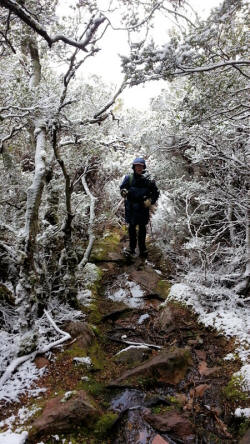 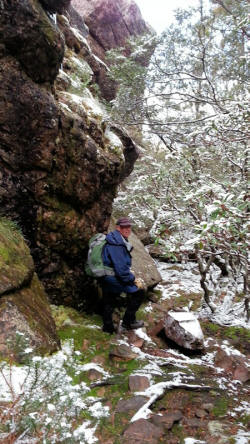 As we struggled up the slope, we were passed by a very fit looking 40-something male in running gear who, it turned out, lived near the mountain and had made over 1,000 trips up Mt Roland, timing himself as he did. [When we later encountered some muddy parts of the track Matthew remarked that he had not seen any evidence of the runner having gone that way, but I suppose he did not always go right to the summit.] I needed to take a few rest stops to get my breath back and have a drink of Gatorade before plodding on uphill. As the incline became increasing steep we needed to scramble up near vertical sections of rock and I wondered if it would be easy to get back down one pinch in particular. By this time my fingers were very cold. At the start of our walk, realising that there would be quite a lot of rock scrambling, I had worn riggers' gloves and they soon became sodden and cold. Therefore, my fingers also became cold. When I mentioned this to Matthew he kindly lent me his spare woollen mittens. These were very difficult to pull on over cold, wet hands but my fingers soon thawed out and the circulation returned. The downside to mittens was that I could not easily grasp hand-holds to assist in climbing so I reluctantly took them off and put on the riggers' gloves again. My fingers were OK by this time and I felt more comfortable climbing.

When the trekking poles we had with us became more of a hindrance than a help we left them on the track and continued on up without them. This made climbing a bit easier as we could grasp branches and rocks more easily with both hands free. 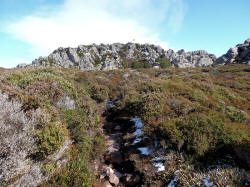 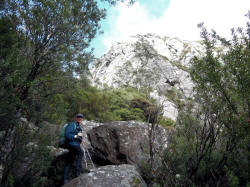 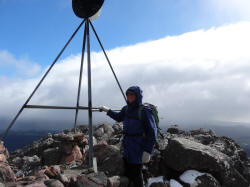 We turned south at the top of the gully and began the more gentle ascent across the plateau towards the actual summit of Mt Roland. Although the notes mentioned a distance of 1.3kms it seemed to me at least that it was a lot further than that. Maybe the distance referred to in the notes was a direct line, whereas we walked quite a roundabout route. It was quite a relief to reach the summit trig point. On this walk I failed to take sandwiches - I had brought them on some of our earlier walks - and I realised it was a mistake. Not that we would have eaten them on the summit because the cold wind was howling up at us and it was very unpleasant on top. I think we stayed there for only about two or three minutes, took a couple of photos and hurriedly started back down.

I knew the descent was not going to be easy. However, it was a relief to reach the top of the gully and to begin the steep climb back down to a warmer elevation. The areas of steep scrambling that I had been concerned about on the ascent proved to be quite manageable, especially on a difficult part when Matthew assisted me by letting me know about good footholds from below me.

My walking boots were Salomon boots, with high sides for ankle protection and a very good, deep tread pattern. I trusted them to offer good grip on slippery surfaces. Maybe a bit too much! As we carefully made our way back down the steep, rocky slope, I trod with my left foot on the downward sloping surface of a large rock. I let out an anguished groan as my leg went from under me and I was sent flying down the track. Matthew said later he saw me do two cartwheels! After I hit the track the first time I thought that this was not going to be good, but then I bounced a second time before coming to rest on my left side, facing down the slope. Matthew quickly called out, asking how I was but all I could get out was that I was winded. I had fallen heavily on my left shoulder and the left side of my upper chest (I don't know which happened first). I was very shaken up but I was able to move my arms, legs, back and head and felt that I was still reasonably intact, with no broken bones. Matthew made sure I was OK and told me to rest, have a drink and try to recover. My day pack had undoubtedly saved me from more severe injury.

One of my trekking poles suffered a slight bend in the lower section. I might leave the bend in place to remind myself to take more care in future.

When I felt able to continue down, I took Matthew's advice to turn slightly sideways when stepping and to use branches and rocks when I could. The remainder of the descent was, for me, a slow process as both my legs had suffered somewhat in the fall and my left arm did not want to work properly. Matthew was as patient as he always is with my slower progress and we reached the end of the track without any further mishaps.

So ended a very enjoyable (until my fall) walk, on a mostly dry track without the cutting grass, deep bog, rain or leeches that we so often encountered on our other walks.